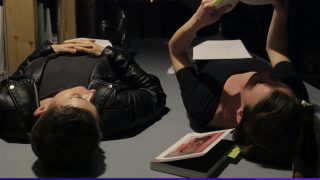 Dementia and the politics of care at the end of life

Acknowledging the duality of its referents – as both relational connections and skin wrinkles developed over time – Age Lines examines relations to aging in and across ages.

Experiences associated with age are ubiquitous yet varied and regenerative. Age Lines is the result of thinking about the age-old subject of age and a starting point for considering how relations are born, maintained, and renewed while aging. This exhibition is a humble gesture toward creating a site for and sense of age relations where fragility, dependency, and transmission are foregrounded.

The project presents the work of Kerry Downey, Alexis Pauline Gumbs, Ilyana Ritchie, and Mia You, as well as objects contributed by individuals near to the project’s development in Utrecht.

In particular, Age Lines highlights mentor-mentee relationships, the legacy of Black and Third World feminist publishing in the US, and intergenerational collaborative practices. The exhibition includes works of art, commissions, exercises, and anecdotes which pull from lineages, cycles, and different forms of measuring age and the passing of time.

Fishing with Angela (2015-2016), a video by artist Kerry Downey, speaks to intergenerational feminist and queer haptic communication by exploring the relationships between fishing and painting, mentor and mentee. Artist and mentor Angela Dufresne shows Kerry how to mimic nature by tying flies in order to catch a fish, Kerry imitates Angela’s gestures with the use of an overhead projector. For If: Kitchen Table Press Covers (2016), scholar, writer, and artist Alexis Pauline Gumbs describes in rich, poetic form five original book covers of publications by women of color in the US, descriptions from which Ilyana Ritchie made drawings. The descriptions and drawings point to books published in the 1980s by the Kitchen Table: Women of Color Press, and underscore the generative legacy of revolutionary publishing and its discourses. Successions (2002-ongoing) is an undone and ongoing “long poem” by poet Mia You about the processual and directional unfolding of loss and gain. For this manifestation of Successions, designer Ika Putranto has created the layout of the poem in the form of vinyl lettering and a sticker within the corridor’s vitrine. Adjacent to the poem and by invitation, those near to the development of Age Lines have contributed anecdotes that reflect their thinking about age and their relationships across ages. Objects such as the exhibition catalogue The Time of Our Lives (New Museum: NYC, 1999), a bottle of regeneration oil, and a drawing by a mother’s daughter are personal signifiers for stories and experiences about age that resonate with each contributor.

In order of appearance:

Objects contributed by individuals near to the project’s development in Utrecht:

1. Alex Martinis Roe: bottle of regeneration oil; “the gift I gave to feminist philosopher and psychoanalyst Luce Irigaray when I visited her at her home in Paris a few years ago.”

2. Rosemarie Buikema: painting made at age 6; “I do not remember making the painting, but I have to believe it was me who painted it since my name is written on the back of the paper.”

3. Yolande van der Heide: Afro combs; “I was thinking about the Afro comb and its trans-atlantic significance as a political emblem over the years. The clenched fist Afro comb came into production in the 1970s during the civil rights movement in the US (think of the Black Power movement and Angela Davis’ mighty ‘fro); a version of this comb was also manufactured in the early 1980s in Nigeria; and closer to home, South African high school students earlier this year had to struggle against a racist ban that prevented them from wearing their hair in Afro or natural form, which went viral internationally under the hashtag #StopRacismAtPretoriaGirlsHigh. All these moments are synonymous with black empowerment, unity, identity, and civil disobedience or struggle. Incidentally, Angela Davis and I are born on the same date (26 January), and Nelson Mandela and I are from the same tribe (the Xhosa). Both made use of and helped give meaning to this tool now, whose legacy is passed down to me, to us, to struggle on.”

4. Anne Punt: photo of Anne twenty-five years ago with her great grandfather Max and his partner Jeane; “I remember being very fond of them. I never realized that he was forty years older than she was. It never mattered.”

6. Marischka Verbeek and Lenneke de Ruijter: the screenplay Savannah Bay by Marguerite Duras, 1984; Owner Marischka (aged 50) and general manager Lenneke (aged 27) are closely collaborating to keep the Savannah Bay bookshop alive and vibrant. Marischka has been working in the book trade for twenty-five years and Lenneke started three years ago; “Our blossoming friendship across age lines is symbolized in our contribution here, which was Marischka’s idea and for which Lenneke has provided her copy (the Dutch translation, performed in 1984 as well).”

7. Binna Choi: The Time of Our Lives exhibition catalogue (New Museum: NYC, 1999); “I saw this exhibition during my visit to New Museum, which was Marcia Tucker’s last one as Founding Director.”

8. Ying Que: grey hairs; “My grandmother had many grey hairs, although I never noticed them. My mother has a layer of grey and the bottom layer of her hair is still dark brown, like mine. I pulled out my first grey hair when I was 17. I realize they don’t always have to do with age.”

9. Suzanne Tiemersma: drawing by Mara (Suzanne’s daughter, aged 5) of their family including the dog, July 2016; “A flower from the petting zoo from Mara and grandma!”

10. Niek van der Meer: razor and shaving brush; “I remember the first time my father taught me how to shave.”

Alexis Pauline Gumbs, If: Kitchen Table Press Covers (2016), text descriptions of the covers of five books published by the Kitchen Table: Women of Color Press, including: A Comrade is as Precious as a Rice Seedling by Mila D. Aguilar; Cuento: Stories by Latinas edited by Alma Gomez Cherrie Moraga and Mariana Romo-Carmona; This Bridge Called My Back: Writings by Radical Women of Color edited by Cherrie Moraga and Gloria Anzaldua; Narratives by Cheryl Clarke; and Home Girls: A Black Feminist Anthology edited by Barbara Smith.

Age Lines is an exhibition that is presented concurrently with Alex Martinis Roe’s exhibition-project To Become Two and is organized by Staci Bu Shea, a recent graduate of the Center for Curatorial Studies, Bard College (New York), who has returned as Curatorial Fellow after a mentorship at Casco during the summer of 2015.