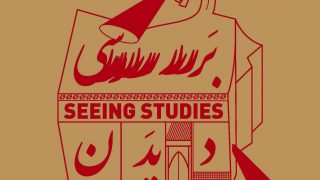 “Unlike a work of literature, translation does not find itself in the center of the language forest but on the outside facing the wooded ridge; it calls into it without entering it, aiming at that single spot where the echo is able to give, in its own language, the reverberation of the work of the alien one.”

– Walter Benjamin, The Task of the Translator

This project, developed by Natascha Sadr Haghighian and Ashkan Sepahvand for the institute for incongruous translation in collaboration with Casco, engages with formations that constitute how we perceive, read, draw and depict the world in order to investigate the ways we learn “to see.” Departing from a schoolbook – a textbook published by the Iranian Ministry of Education used to teach art in the first year of Iranian public middle school – the project takes shape in three overlapping chapters.

A facsimile reproduction of the schoolbook is the basis for a bilingual publication (Farsi/English) that researches “schools of seeing,” from Ibn Al-Haytham’s Book of Optics, the “period eye” of the Italian Renaissance to mechanical drawing in late-19th century France and photography in Qajar Iran. Operating as editors of the book, Sadr Haghighian and Sepahvand also give shape to a spatial arrangement at Casco’s project space, involving a series of overhead projectors and selected material from the publication. The material is applied to the overhead projectors in various ways resulting in partial projection. This method creates a simultaneity of perspectives, restricts visibility and sets viewpoints into motion. Addressing conventions as well as boundaries of perception and depiction, the arrangement varies three times over the course of two months. In the third chapter, the space will serve as a setting for a four-day workshop session. These sessions offer an opportunity to discuss the propositions in seeing studies together with some of the collaborators and contributors to the institute’s activities.

The investigation here moves beyond art instruction and takes a polyphonic look at the existing interpretations and depictions of the world in its globalized state, questioning the ways in which we perceive. It further explores approaches for us to destabilize presumably fixed viewpoints and weave an open history that “sees” knowledge re-circulating, re-interpreting or re-applying. The audience is welcomed as study companions, fellow readers and interpreters to set up a temporary study room at the Casco space.

In place of her biographical note, Natascha Sadr Haghighian wishes to draw readers’ attention to bioswop.net. On www.bioswop.net artists and other cultural practitioners can borrow, exchange, and compile CVs for various purposes.

Ashkan Sepahvand reads, writes, cooks, researches, edits, and translates. He lives between here and there, works in sporadic bursts of intensity tempered with collaboration and conversation, and seeks those spaces where wonder can take place and stories may be told.

This book is produced by dOCUMENTA (13) with Casco and the institute for incongruous translation and published by Hatje Cantz. It is designed by Farhad Fazouni and image-shift.

The publication is made possible with the additional financial support of Fonds BKVB for Electric Palm Tree, Hessische Kulturstiftung and Extra City Kunsthal Antwerpen.

You are warmly invited to join a four-day workshop with some of the contributors to the publication. The detailed programme will be available on our website from mid-December 2010. The workshop is organized in partnership with Dutch Art Institute and Extra City.