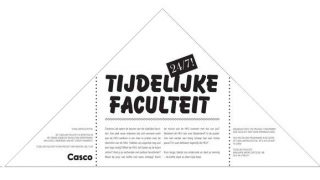 Metahaven is a design studio that explores the ruptures in the fields of design, research and geopolitics. They operate with strategies of fiction and allegory to revise and mobilize the role of corporate identity and aesthetics in projections of political and economic power. They stage their speculative inquiries in highly visual and conceptually dense assemblage which can take shape on the printed page, as a client brief, in ephemera like stamps, brochures and posters, or in the public light of exhibitions, lectures and debates. Much of their work, since their founding in 2006, is gathered in the forthcoming book Uncorporate Identity, which also features a host of contextual and allusive texts by architects, novelists and political scientists.

Stadtstaat. A Scenario for Merging Cities projects a mise-en-scene of an urban experiment not city twinning, but city merging. Going beyond the conjectural scenarios of place-branding that have inflected their recent work, Metahaven invents models for a regional “city-state.” With a programmatic reflection on the homogeneity that might befall European “unification,” we are invited to imagine a policy decision by two mid-level Northern European cities that bid to weather the economic downturn and enhance their networking capacities by becoming one – Utrecht and Stuttgart. With a nod to the EU’s primary purpose as a trading bloc, these two enterprising cities try to become more competitive by joining forces, and pursuing the dream of unlimited network power. Departing from Metahaven’s forays into encryption and the space-structuring effects of new information technologies, Stadtstaat is managed via an information architecture called “Trust,” a social networking platform that governs through participation.

Stadtstaat generates forms that render the role of design in a managed and technocratic European reality more tangible and debatable. The graphic surface becomes a platform that turns communication into political interaction. This is done through the production and distribution of ephemera like letterheads, models, tapes and posters as well as “tag clouds” and “chats,” which embody the emerging communal netspace of the formerly distinct cities.

On the last day of Stadtstaat. A Scenario for Merging Cities, a public forum with international thinkers and practitioners is organized in order to discuss the issue of urban governance and politics in the light of network power and the thrust of participation.

In the light of Stadstaat and under the guidance of Casco, a group of students from the Creative Lab of Utrecht School of Art (HKU) teamed up for a semester in order to develop a new HKU identity. In order to discuss the social and cultural meaning of the art academy including the HKU in relation to their visual and spatial identities, the group is organizing occasions to meet their fellow students and other actors of the school and public interest prior to the presentation of their final proposal. For further information, please contact: Julian Wassenaar.

Metahaven is invited to have a series of workshops with the students from the Utrecht Graduate School of Visual Art and Design in Utrecht (MaHKU) around the methods and issues in the Stadtstaat. The workshops are developed in the framework of Utrecht Consortium, a collaboration amongst several Utrecht-based contemporary art institutions and Mahku.