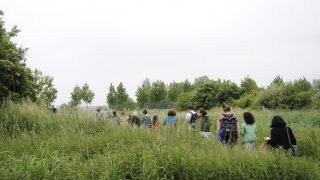 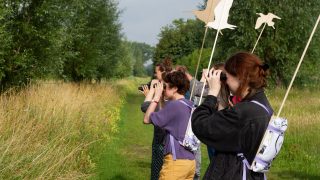 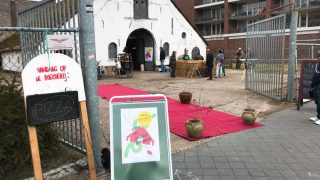 Casco Art Institute: Working for the Commons wants to contribute to a sustainable societal transition in which the commons play a central role. Since 2017, Casco Art Institute, together with artist collective The Outsiders, has given concrete expression to this transition through projects in the Leidsche Rijn district of Utrecht – falling under the long-term trajectory Leidsche Rijn Luistert.

The Travelling Farm Museum of Forgotten Skills started through creating a space for commoning in an old farm named Hof ter Weyde, situated in the heart of a residential area. Originally part of a large agricultural area, the farm is now enclosed by the Terwijde shopping center and overlooks the train station of the same name, both of which are named after the farm. At the beginning of 2018, Casco Art Institute and The Outsiders moved into the farm and were inspired by the many questions and stories that surround the building.

Why is the farm empty? Where did the farm move to? Where does the food of the inhabitants of the Leidsche Rijn district actually come from, now that almost all agricultural and livestock farms have disappeared from its region?

The project started by giving local residents the opportunity to think along about these kinds of issues, to express themselves about the possible future of the farm, and they could commonly contribute to it. In our highly urbanized and industrialized society, we urgently need to get started with ecology. A broader definition of what constitutes an ecological practice and the representation thereof by artists and designers were the starting point. Local entrepreneurs, schools, social institutions and government made use of this cultural commons.

“…How a little barbecue could evolve into a garden rave, how left-over materials were made into chicken shelters, how borders were getting crossed by slides or doors, how I felt I became part of the ‘farmhouse family’. Everything was growing.” – Merel Zwarts, taken from this publication

A farm on wheels

The success of this project in Leidsche Rijn created more questions and ambitions. However, the farm transferred to a new owner in the course of 2019 with no time for us to organize a possible co-ownership of the farm. With this change, the choice was made to move around the farm, into the neighborhood, connecting more with other surviving farmers, residents, especially children and environments. This is how the Travelling Farm Museum of Forgotten Skills came into being. A “farm on wheels’’ with whom we have been able to visit different farm sites in the area and re-experience how residents can be involved in the issues of farming, ecology and heritage, and thus the commons. Not fixed by location, the mobile installation consists of a black cargo bike, with on its front-end a roaming architecture taking the shape of a farmhouse, made of mirror glass. The Travelling Farm Museum is a tool for connection, preservation, and mutual learning which lives in seasonal cycles using an accessible structure in size, movement and scale.

In response to the changing conditions, the project team defined the year 2020 as “the time of plowing and sowing” – activities that, while less visible, are fundamental for natural growth. With the motto, “food for health, health for the planet,” Travelling Farm Museum of Forgotten Skills focuses on ecological cultivation skills for food for health and finding ways to connect with local farmers in Leidsche Rijn and in the broader Utrecht area. The environmental catastrophe during the pandemic times reconfirm the convictions of how critical it is to preserve and disseminate agro-ecological stories and skills. Learning from the past and understanding the present – in order to imagine a future where we can survive well together. During Winter, we research, plan and design, organizing the collection, as Spring starts appearing we sow the seeds of our activities that grow throughout the Summer, and in Fall harvest comes to help us prepare for the Winter ahead. These research and action phases inform each other, oftentimes blending into each other following the energies of the community’s activities.

Welcoming and able to integrate everywhere she arrives, by putting up a mirror on the environments she encounters, Travelling Farm Museum remains non-intimidating in its simplicity and utilitarian design. By reflecting her surroundings, she evokes curiosity and is designed to make the different activities and production processes that take place in the area visible by building a collection and connections. Through workshops, storytelling and exploring the materiality of food production and environmental processes, the project makes meaningful connections between the different members of the Leidsche Rijn community, inhabitants, farmers and growers alike. When not on the move, the museum is parked in a temporary depot, a storefront in the Terwijde shopping center, the complex that encircles the farmhouse, and has open doors during its working days.

This project and the continued dialogue with the (international) public has shown us that the stories of the farmers we have learned are global. Climate change due to corporatist agriculture but also to the contemporary urban lifestyle, is a fact. We want to take a step back and gather these stories by transforming them into valuable material, audio-visual, graphic and architectural language is needed to work further and grow the collection with a wider perspective. We think that we need time to translate the experiences into an exhibition that could stimulate sustainable co-living, working with old and new participants through (re)discovering their proximities and cultural identity. Eventually the museum would like to find a land… let’s see what the future has in store.