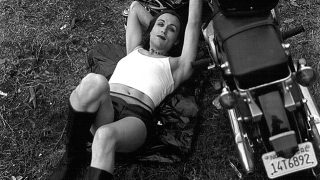 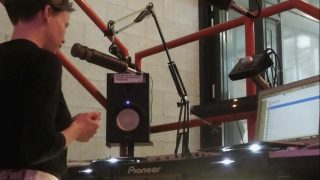 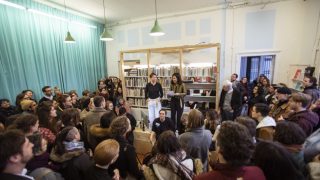 Casco Art Institute: Working for the Commons presents two new exhibitions for the Spring edition of its biannual exhibition program: Two Rubatos, an experimental sound-focused solo exhibition by artist Terre Thaemlitz, and Footnotes on Equality, a collective exhibition of art and research by members of GRACE – Gender and Cultures of Equality in Europe in collaboration with Rotterdam-based architecture and design collective Cookies. The exhibition program opened on Friday, 8 March 2019, International Women’s Day, from 17.00–20.00 at Casco Art Institute, in conjunction with the GRACE conference ‘Gender and Cultures of In/Equality in Europe,’ 7 – 9 March 2019 at Utrecht University.

Both exhibitions are in line with Poetics of Living, one of Casco’s study lines on art and commoning practices, co-initiated with Rizvana Bradley. With Poetics of Living, we explore non-normative and non-binary ways of living together in consideration of rapidly changing discourses around sexuality, health, communal life, and death.

Two Rubatos, an exhibition by Terre Thaemlitz – who as a non-essentialist transgender person rotates gender pronouns – presents two new multimedia installations of existing piano solos and images originally utilized during live performances of her Rubato series from the late 1990s. Rubato is an open-meter improvisation method of musical performance that disregards strict tempo, instead varying it by either quickening or slackening. Her piano solos are renditions of songs by the well-known music band Kraftwerk and British electronic pop musician and producer Gary Numan that uses rubato as a core artistic method to trouble the melody recognition process. Thaemlitz’s sound work explores thematics of authorship, identity, and post-industrial technologies found in albums by Kraftwerk, as well as themes of sexual ambiguity in the works of Gary Numan. Likewise, the artist also presents image parodies to jaywalk with the sounds, and a critical essay that accompanies each rubato.

Footnotes on Equality, an exhibition by GRACE researchers in collaboration with Cookies, a Rotterdam design and architecture collective, centers around an installation featuring an eclectic collection of art and everyday objects. The objects act as indexes for various contentious points around the cultural production of (in)equality, and props to tell stories about the contemporary fights against injustices. GRACE researchers have been conducting fieldwork across Europe that has brought them into contact with people or communities with life circumstances where struggles for equality take place but also get complexified – such as when equality for one group or issue means corresponding inequality for another. Objects are collected out of such situations and transformed into a labyrinth-like installation, inviting the viewer to consider their own situation of (in)equality and where it connects with others. Like Thaemlitz, the intention of the GRACE researchers and Cookies is to trigger the imagination for complexity, so it might be understood as an essential commoning method and value. The researchers take a critical stance towards how one’s struggle, right, or identity is co-opted and commodified – taken into a sort of “exclusive ownership” – in contemporary capitalist culture. Such structural processes may even lead some to be “against equality.” The exhibition is also an attempt to undo a disciplinary research process, and make art practice and co-creative work an integral part of research and how it is shared.

Japan-based artist Terre Thaemlitz has worked in sound, performance, and on multimedia albums and installations for over thirty years. In 1997 and 1999 respectively, Terre Thaemlitz produced two albums featuring piano renditions in tempo rubato of music by techno-pop group Kraftwerk and electronic-pop musician and producer Gary Numan. The renditions are characterized by open-meter improvisation – rubato, a musical performance that does not adhere to a strict sense of time – and computer-aided composition. The piano itself is digitally processed with improvisations stepped in across the musical notes, along with distorting noise and flooding resonance to cloud the identification of the original tracks. Each album was accompanied by image parodies of the original artists’ cover art and extensive analytical essays. All of this goes towards Thaemlitz’s contribution to a sonic discourse of interpretation and queer production of meaning across these musician’s techniques and thematics as well as her own.

Die Roboter Rubato (1997) references one of Kraftwerk’s most famous songs “Die Roboter“ (“The Robot”), and how their representation as robots has become symbolic of the group. Thaemlitz casts their recurrent themes of identity and post-industrial technologies as heteronormative processes of objectification and fetishization of gendered machines. In rejection of Kraftwerk’s infamous The Man Machine, Thaemlitz ponders the cultural necessity and potential of a “femme machine.” With Replicas Rubato (1999), Thaemlitz traces “the lie of sexual identity” and its material and non-material “truth of essence” (i.e. being “born this way”) by discussing the queer thematics of Gary Numan’s music, and his ambiguous sexuality. Replicas was the name of the second album by the band Tubeway Army, which was fronted by Gary Numan and considered to mark the beginning of Numan’s transmutation with machine and androgynous representation. The installations of Die Roboter Rubato and Replicas Rubato feature Thaemlitz’s distorted and cloudy piano solos that strain the melody recognition process and presented for the first time are original 35 mm images that were projected in her performances. The associated essays written by Thaemlitz ensure that meanings are not lost to poetic vagary.

The rubato works are as much about the interpretative process of being a listener/reader and publicly contributing to sonic discourse on legibility as they are about the private desires and limitations of Thaemlitz’s own commentary and construction of “alternate truths” through messy contradictions and hypocrisies. Thaemlitz demonstrates what the work of referentiality and critique can do, identifying analysis as a kind of performative play that the spectator does, implicating them in cultural production through their consumption of texts, images, sounds, and asking what action to take next.

Terre Thaemlitz (1968) is an award-winning multimedia producer, writer, public speaker, educator, audio remixer, DJ and owner of the Comatonse Recordings record label. His work combines a critical look at identity politics – including gender, sexuality, class, linguistics, ethnicity, and race – with an ongoing analysis of the socio-economics of commercial media production. She has released over fifteen solo albums, as well as numerous 12-inch singles and video works. His writings on music and culture have been published internationally in a number of books, academic journals, and magazines. As a speaker and educator on issues of non-essentialist transgenderism and queerness, Thaemlitz has lectured and participated in panel discussions throughout Europe and Japan. Most recently for documenta14, Thaemlitz presented deproduction (2017), which investigates the awkward, uncomfortable, and hypocritical power dynamics behind Western humanist notions of family, and how they function internationally through processes of globalization. As of January, 2001, she resides in Japan.

Footnotes on Equality – Collective exhibition by GRACE – Gender and Cultures of Equality in Europe, with Cookies

Footnotes on Equality is an exhibition by fifteen researchers of GRACE – Gender and Cultures of Equality in Europe, in collaboration with Rotterdam-based architecture and design collective Cookies. The exhibition centers around a multi-year project to build an eclectic collection of art and everyday objects that serve as indexes for various contentious points around the cultural production of (in)equality. The exhibition plays out at Casco Art Institute with Cookies, and on the website footnotesonequality.eu developed by Anja Groten and Joana Chicau in collaboration with the GRACE researchers.

The researchers of GRACE have been studying and working across Europe, conducting their respective fieldwork and encountering instances where the notion of equality is an ongoing struggle sustained by social movements and in dialogue with efforts in governmental policy and legislation. They’ve collected objects out of these situations as cultural props to tell stories around instances when (in)equality is experienced – be it apparent or subtle, personal or structural, affective or rational. “Embodied discomfort” was used as a methodology in constructing the collection so that the researchers could reflect on their own struggles against racism, sexism, and fascism. They take a critical stance towards how one’s struggle, right, or identity is co-opted and commodified – taken into a sort of “exclusive ownership” – in contemporary capitalist culture. Such structural processes may lead the individual to be critical of equality, or even become ammunition for further injustice.

GRACE researchers and Cookies reflect on the state of naturalized notions of equality in Europe with new visual and sculptural presentations. The installation shares sensibilities that the researchers deem “footnotes” to mainstream understandings of equality. Cookies has emphasized the object collection made by the GRACE researchers as evidence, additional support, critique, alternative perspectives, and anecdotes, so that Footnotes on Equality shows how struggles are ongoing and are incomplete. The focus is on exploring innovative anthropological methods of “making” using the exhibition as a supplement to the academic paper as an ethnographic “scenography” to construct, analyze, and critique the concept of “equality.”

The collaborative relationship between GRACE researchers, Cookies, and Casco Art Institute expands the visual language of the project. As a result, the exhibition offers artifactual analysis as a way to both engage and disseminate, as well as produce “new” sites and events of and about cultures of equality. Cookies is interested in the wider implications of the GRACE researcher’s work, revealing the objects in the exhibition as anecdotes of (in)equality – against the more bureaucratic, institutional definition of equality where singularities and struggles in solidarity are typically lost. For this exhibition, Cookies has developed a system of hanging textile elements – articulating the space into opaque and semi-transparent layers, corridors, and cul-de-sacs. The collection includes an array of material from participants’ observations and field research in the European Union, including notes, audio and visual recordings, transcriptions, artworks, and readymade objects. The researchers share their investigations on broad themes within their work where the concept of individual and structural equality is challenged: in sports’ gender inclusivity; in feminism across religion and secularism; in anniversary celebrations for LGTBQ rights and their material traces; in migrant, feminist and anti-racist solidarity networks; in menstrual and big data flows; in the war and memory of the Syrian uprising; in sexual violence and domestic abuse; and in the politics of visibility for transgender and disability embodiment.

Support for the exhibition program comes from Gemeente Utrecht; DOEN Foundation via Arts Collaboratory; Foundation for Arts Initiatives; and GRACE – Gender and Cultures of Equality in Europe via the European Commission’s Horizon 2020 research and innovation program under the Marie-Skłodowska-Curie Actions grant. Additional partners of the exhibition program include the Gender Studies program at Utrecht University; Terra Critica Utrecht; and niet normaal* queer party that takes place at EKKO, Utrecht.